In the News: Student Ryker Weaver Joins Trekkers’ Board of Directors 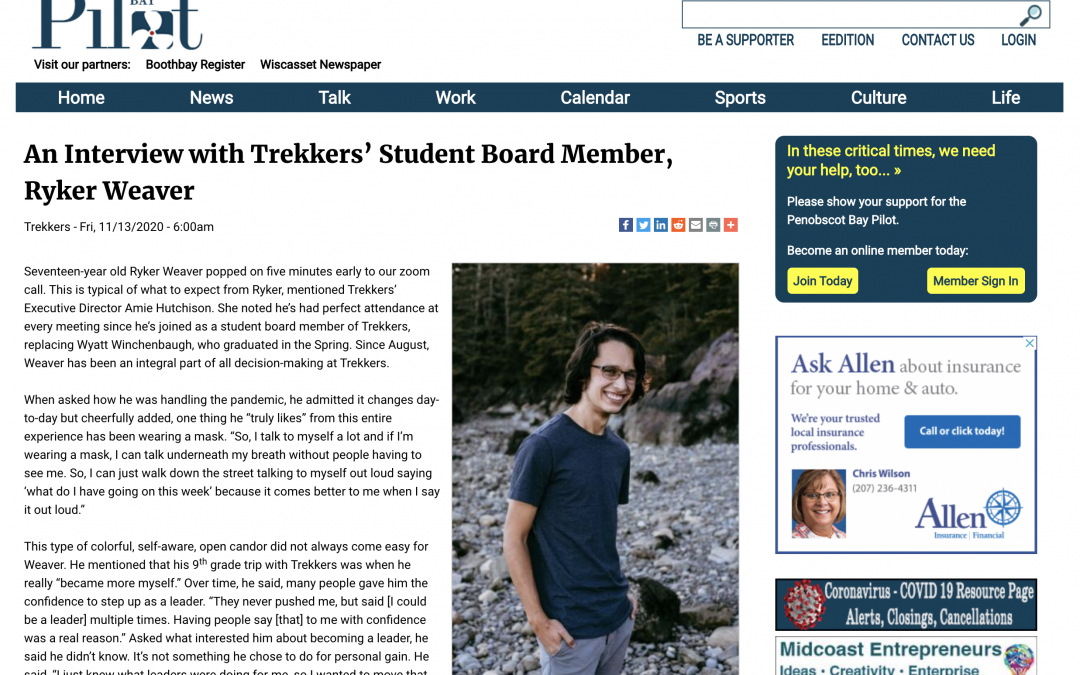 Read the Full Article on The Penobscot Bay Pilot

Seventeen-year old Ryker Weaver popped on five minutes early to our zoom call. This is typical of what to expect from Ryker, mentioned Trekkers’ Executive Director Amie Hutchison. She noted he’s had perfect attendance at every meeting since he’s joined as a student board member of Trekkers, replacing Wyatt Winchenbaugh, who graduated in the Spring. Since August, Weaver has been an integral part of all decision-making at Trekkers.

When asked how he was handling the pandemic, he admitted it changes day-to-day but cheerfully added, one thing he “truly likes” from this entire experience has been wearing a mask. “So, I talk to myself a lot and if I’m wearing a mask, I can talk underneath my breath without people having to see me. So, I can just walk down the street talking to myself out loud saying ‘what do I have going on this week’ because it comes better to me when I say it out loud.”

This type of colorful, self-aware, open candor did not always come easy for Weaver. He mentioned that his 9th grade trip with Trekkers was when he really “became more myself.” Over time, he said, many people gave him the confidence to step up as a leader. “They never pushed me, but said [I could be a leader] multiple times. Having people say [that] to me with confidence was a real reason.” Asked what interested him about becoming a leader, he said he didn’t know. It’s not something he chose to do for personal gain. He said, “I just knew what leaders were doing for me, so I wanted to move that on in [some] way.” He added, “my generation has been raised in a way that we’re supposed to use our voice and I think that is going to be very useful.”

On the topic of his generation, I asked Weaver if he thought mental health was a priority right now, given the rising levels of anxiety among his peers on a national scale. He agreed it was, saying “because you can deal with it yourself, but not really. You can say you can, but I don’t think you can. And I think Trekkers can help put you in situations where there’s support and offer other supports from around our community.”

“Ryker, what are some things you hope to accomplish by the end of the year?” He smiled and said “just to understand some of the conversations that are happening,” but that he is excited and nervous to be a part of it. Then, once again, Weaver surprised me with equal parts wisdom and bravery, saying “but that’s the joy of it, it’s something new and that’s what Trekkers is about – experiencing things you may not have tried before.”

As our team continues on in an uncertain year, adapting however necessary, we know listening is a crucial first step in meeting the needs of students. Our team is honored to have Weaver onboard, not just because he’s pretty wise for his age but also because he is brave enough to lead at a time when such an authentic voice is most needed.